In Remember getting a Fax from an old schoolfriend …
Basically it asked me if:
I wanted to play in a Rock-Cover Band
I wanted to do that on a Stage?
I wanted to get Paid for doing that

I would be playing with my old school Buddy on the Drums and 2 new guys who I’d never really worked with before.
well………What’s the Catch?

I had to Travel 10,000 Kilometres to get there first!
My Friend Faxed me from Bangkok with a story that he’d met a Manager there who could get us playing there , Good accommodations etc….
All I/ We had to do was Play music I really liked! Mr Big, Bon Jovi and even songs “nobody” knew by Ritchie Kotzen! But also some Cranberries, Steppenwolf and even Richard Marx!
So I bought a 1 way ticket and Headed east….
I don’t want to get into too many details about what a 21 year old , guitar playing, guy gets to see and do in Bangkok…… 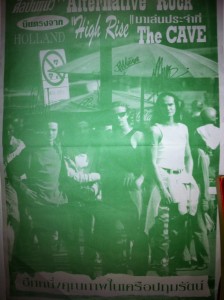 The same day we arrived in Bangkok we had some Auditions in ( For me) really big venues! It was great! People taking us in as Rock Stars! After 2 months gigging in Bangkok we landed our first real gig in Ubon Ratchathani , That’s  North- Eastern Thailand! We shot some Promo- Posters and they were up throughout Ubon… From Holland: Highrise!

At that time I also discovered that I liked to sing! What better place to practise that than on stage with an audience! Well , I guess not in everyone’s case, but for me it worked!

We were Rockstars there in good old Ubon Ratchathani! We played two 45 Minute shows every Night 6 days a week, A Hotelroom with AC, Cable TV, Roomservice, a Swimming pool Free Food and the kind Thai People showing us around and taking care of us! (I was kinda sad to see the whole place didn’t exist anymore when I visited in 2008….) 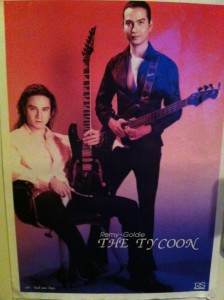 Unfortunatly there were some Personal issues and blah blah blah , so the whole thing lasted a full 4 Months!
The band needed a break! And they wanted to do that back in Holland.
Not This guy I can tell you!
I did go back to Holland , but only to tell my Family that I would be in Thailand for a while longer!
I had this thing going with a local Celebrity , I had just tasted the life of a Musician and I wanted more of that! Besides I had just Resigned from my job at the musicstore to go and make it Playing Music!
So, Long story short , I Returned to Thailand all by my Lonesome self with two Guitars , My PGM100 and PGM 500, And my Rocktron Chameleon Effects/Pre-amp.
Luckely a lot of the people who’d seen me play with “ Highrise” remembered me, and really wanted me in their bands! So I had a lucky break!
My Celebrity Girlfriend episode didn’t last very long, we broke up and  I played everywhere in Thailand! In Ubon, Udorn, Khon Kean, Khorat, Lopburi Bangkok and some other places I can’t really Remember..
I learned the Thai Language on the street by beeing surrounded by people who didn’t speak any English( That way You’ll learn much faster and easier I guess), and I also started singing in Thai…
That Paid off!
I was singing ( more than playing guitar ) in this nice place called “ The MonkeyPub” in 1999, and one day some Producers from RSPROMOTION came by and offered me a Record deal…

I worked with them for a few months, then they hooked me up with Goldie Stanley , who was working with RS at that time , to form a new Duo!
Remy- Goldie : The Tycoon
The Tycoon??
When I found out about the name , It was already on the Album-cover…
Why not just Remy & Goldie??
Anyways….
I did two albums with RSPROMOTION. 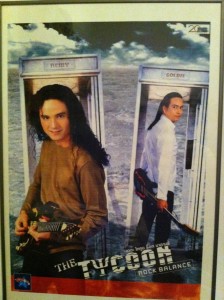 Man! The Sales were Devastating! The internet had Many downloads available…
With The 2nd album it became worse, 2 weeks before the release I was walking around in The Famous “ Phan Thip” plaza and I found my own Album With Cover and all…
Inside Job?
The worst thing that I can Remember was this one time after a concert a fan showed up and asked me if I wanted to Sign his album. Sure! When he handed it to me it was a Re-writable Cd…
That really ticked me off! I Told him to buy my album first!
So! In 2002 , with some persuation from my Mom and other Family Members, I decided to go back to Holland and Start again…

In the 7 years In was in Thailand I had like 3-4 months off.
The rest of the time I was always Playing /performing from Football Arenas to the Tiniest #$#$holes you can imagine! I learned a lot from playing live in almost everyday different sound conditions! In 2000 I was asked by IBANEZ Thailand to join Paul Gilbert on stage during his Asian Clinic tour! After that amazing event, the 5 other guitarists and me were asked to join Paul for Dinner. Which was also very nice ! We talked about everything ! Not just guitars… Personal stuff etc.. While eating Incredibly Good Chinese Food on one of the top floors of the Bayoke Sky tower! Lightning even struck that evening…

read more in: Back to Holland again…

Filed under about. Tagged Thailand, tycoon.